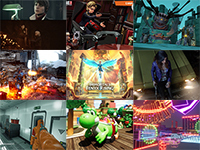 There we go with the first week of the year in the bag and boy was it a crazy one. More on the world outside of video games, as it was a bit on the slower side per usual there, but that does not mean it was not crazy. There was a whole lot for Hitman 3 to take in as we get ready for the launch of the game. Some new stuff for Evil Dead: The Game, Gods Will Fall, and The Medium. Just to throw a few of the video games we had updates for to help distract us all from the world possibly collapsing around us. If we do not see it, it does not happen, right? That is the mantra we might have to go with here to help keep the sanity.

As for other news, it looks like we might also be kicking the year off with a few video games up for review. Keep an eye out for that. It also looks like the big tech conventions are still happening in a virtual form too and there is any guess as to what will come out of those in terms of video games. I have a feeling it will be better screens to watch them on or maybe some new VR/AR tech to give us deeper experiences. No matter the case, we will try to get as much of that covered here next week as it flows out. Just as we have the last few years out there too.