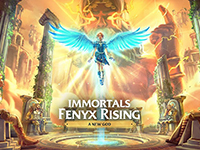 If you missed out on the little gem that was Immortals Fenyx Rising when it launched a month ago, do yourself a favor and give it a go. Not only because it was worth the time and money but also because it looks like all of that DLC that Ubisoft spoke of for the game might be hitting soon to expand it all further. How soon? Well, if reports and rumors are correct, we could see the first DLC for Immortals Fenyx Rising hitting us on January 21st. Then roughly a month gap between each of the following ones that we currently know about. If this is not just a weird joke placed out there.

It looks like it is being reported that the DLC listing and Trophy lists for the first DLC, A New God, has it coming On January 21st and then The Lost Gods on February 25th with Myths Of The Eastern Realm on April 1st. A weird timeline and most likely a placeholder for all of this as the release order is off based on the timeline we have been originally given. The last two should be flipped in release order from what we were told before. Ignoring that, it does seem possible that Immortals could be seeing its first expansion in a few weeks, but until I see something directly from the source, I am going to have some salt with these new findings. Are you putting any faith in these dates being close to what we should expect or will these just be found as placeholders? Do you think that they could have changed the release order for some reason to get all of the Greek content out before going into the Asian? Have you given Immortals Fenyx Rising a chance yet or will you be picking it up to see what it is all about now? Let us all know what is on your mind down in the comments and then feel free to discuss it all as you wish. If there is more for Immortals Fenyx Rising, you know it will be up on the site for you. Please keep checking in for all of that and much more.