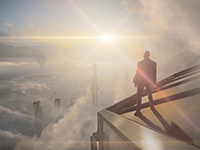 In just over two weeks from now, Hitman 3 is going to kick off and we will be able to dive further into this world of assassination out there. We have seen a bunch of fun stuff so far for the game and January 20th should have us all finding a whole lot more. Thankfully, just ahead of it all, we have some new gameplay that shows one of the ways we will be able to enter and go about the Dubai mission in Hitman 3. Something that looks and feels like something out of a few spy movies out there as 47 aims to get in undetected to be able to bring down The Scepter in the world's tallest building.

All of this footage for Hitman 3 shows off the scale of things once more but makes it feel like we only have one real point of entry into the event and that is by climbing the outside of the building and sneaking in. There might be others on the return visits we know we will have to make to be the best assassin, but it just feels like there will most likely not be many starting points as we have seen in other missions. That and it also feels off that we get to see a costume change for 47 here, but it is done at a weird point in the gameplay. Instead of in a coat room, we change as we walk through some curtains? Seems a bit off and maybe we will know more when Hitman 3 hits us. It just seems like things are a little bit different than we have seen since this first reboot of the IP.

Hitman 3 is the highly anticipated finale to IO Interactive’s expansive World of Assassination Trilogy that began back in Hitman 2016. The game will take Agent 47 on an adventure across the globe as he eliminates the leaders of a menacing secret society, and his journey begins atop the tallest skyscraper in the world. As part of our exclusive coverage of the game, you can now watch the first 5 minutes of Hitman 3’s opening Dubai mission, during which Agent 47 descends upon The Scepter.

Are you still excited for Hitman 3 to launch or will you still be holding off until after launch to see how it all goes? Is it weird to see how things transition here or is it just how the footage was captured and will make more sense in the hands of the gamers out there? How do you think we will enter into this building in other ways as it seems like a hard thing to offer up many starting points that are outside the building to jump from? Give us those answers and thoughts down in the comments and then feel free to discuss it all as you wish. If we scrounge up any more for Hitman 3, you best bet we will have it here for you.