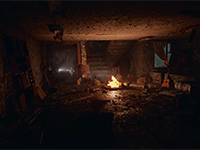 The footage for S.T.A.L.K.E.R. 2 has been slowly coming out there ever since it was first announced earlier last year. Even then, it seems like GSC Game World is playing everything very close to their chest for what the game will look like in full form. I have a feeling it will work similar to the original S.T.A.L.K.E.R., but we could be off. Given that all we have is the atmosphere and setting to look at and nothing that feels like true gameplay for us to take in. We cannot even tell if it the PC, Xbox One, or Xbox Series X version of it all too. My guess is the PC side if it is not pre-rendered in the first case.

What we have to tease us a little more for S.T.A.L.K.E.R. 2 is a little under a minute to highlight the landscapes and scenery we will we be moving through. The fire and lighting do look a little top-notch here and it is impressive, but visuals do not make a video game here. Especially if it was not for the fact there was the S.T.A.L.K.E.R. 2 title that drops in, I would never have been able to tell it was this game. It is all very generic in those terms. I do hope we will see something true for the game in the coming weeks instead of just small teases.

A long and tedious road.

The hostile and treacherous Zone.

A blood trial, separating your old life from a new one…

The debut S.T.A.L.K.E.R. 2 trailer at the Xbox Games Showcase was all about the atmosphere. And now, here comes the first-person look at the Zone.

That’s how the game actually feels: fast-paced change of scenery, ominous landscapes and the ever-present feeling of an inevitable danger accompanied by a barely-distinguishable guitar soundtrack.

You’re seeing this world with the eyes of a stalker named Skif — remember the codename, you will hear it a lot. Following the steps of its predecessors, S.T.A.L.K.E.R. 2 introduces a completely new main protagonist. His actions will shape the new grand chapter in the history of the Zone.

What are your feelings on this new teaser we have for S.T.A.L.K.E.R. 2 right now? Would you have been able to tell it was that game if you were not told or did you spot something that was a dead giveaway? When do you think we will see the first true gameplay for the game out there and will it be some time earlier in the year? Let us all know what you are thinking down in the comments and then feel free to discuss it all. If there is more for S.T.A.L.K.E.R. 2, know we will have it all here. Just keep checking back in for all of that and much more.