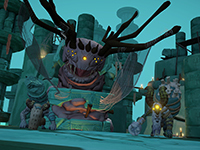 The launch of Gods Will Fall is eminent on the PS4, Xbox One, Switch and PC and with that means more pre-order options to go into. That and a bit of gameplay from Clever Beans to help us understand the game we might be diving into. All of which would be things that we would have expected a few months ago when Gods Will Fall was announced for us all, but hey, sometimes we have to do things differently. It helps build up the suspense for a video game like this and get us ready to dive right into it all. If it looks like a video game you want to sink some hours into, at least.

For those that have not skipped on down to the video for Gods Will Fall already, it looks like you can pre-order the title right now and picks up some fun extra gear to wear in the game while going about the world. For those looking to drop a few more bits of currency out there, we have the Valiant Edition for Gods Will Fall that houses a few more gods, classes, items, skills, and other cosmetics to add in. This weirdly sounds more like an expansion or DLC add-on that would have come later but can pick up now. I mean, it is called that from the start so it is odd to see a whole different edition like this instead of just saying we have paid DLC from the start for you if you want to buy it. Gods, I hate seeing DLC well before a game's release instead of just being added in.

Deep Silver is pleased to announce pre-orders are live for Gods Will Fall with the exclusive Hunter’s Head Gear to be bestowed upon those who pre-order the game ahead of its launch on January 29.

The Hunter’s Head Gear is assigned at random in each new game playthrough. The thrill of the hunt runs through the blood of the clan and it is ritual for the trophies seized to be worn proudly and displayed for all to take notice. The hides of five exclusive beasts — a wolf, bear, boar, fox, and badger — are fit to be worn by any warrior and shall act as an emblazoned warning to the gods that the hunt is indeed on.

Developed by Manchester-based Clever Beans, Gods Will Fall is a high stakes, dark fantasy action game about the few remaining Celtic warriors of a destroyed army on their way to overthrow the diabolical gods. Gods Will Fall will launch on Jan. 29, 2021 for the PlayStation 4, Xbox One, Nintendo Switch, and PC.

What do you think about the gameplay for Gods Will Fall that we have here? Does this look like a game you will give a little bit of time to or will you be waiting for a bit before getting into it all? Do you also hate when we see paid DLC this early in the game and when will we see things move back to getting a full game at launch and then expand later because there were things that could not get in the first time? Give us all of that feedback down in the comments and then feel free to discuss it all as you wish. If there is more to Gods Will Fall, we will share it all here. Just keep checking back for all of that.