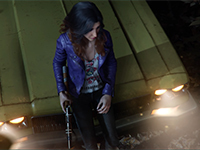 The actress from Ash Vs Evil Dead will be back to fully voice her character in Evil Dead: The Game when it comes

This may not be the biggest of break news out there, but as a fan of Ash Vs. Evil Dead and seeing some talent get more work, I am glad to report that it looks like Dana DeLorenzo will be lending her voice to bring Kelly to life in the game. It was assumed back when we first had the announcement from Boss Team Games that we would see the character as it did look like she was in there for a few seconds. Also, it was stated we would see some of those characters mixed into Evil Dead: The Game too. Now we have word directly from the actress she will be giving us the same character to love and play with unlike other games that try to get someone to try to emulate it. Sure, this will not make or break the game, but for us diehard fans it is a nice little touch to add in.

This now confirms at least two of the cast from over the years and various other Evil Dead universe will be in there to give us a closer feeling to the universe. Granted, Bruce Campbell feels like this game could not be done if he was not on board. It does beg the question as to what the other characters we will see and get to play as will be. Also, if we will see more from the TV show over the films coming back in. That or if we will see some of the younger cast from 2013 join in the fun for Evil Dead: The Game too. I would be lying if I did not want to see Pablo in the mix somehow, though. Even a little Lucy Lawless or Ted Raimi would be nice. I guess we will just have to keep combing the announce trailer for hints and keep an eye for when they make the announcements too.

Get the deli slicers and F-💣s ready, because I’m gonna kick some serious Deadite ass in 2021!

Did you assume that we would see this character in full form in Evil Dead: The Game or did you fear they would use a knock-off to bring Kelly to life? Do you think there will be more than generic lines read and we will get a full story in this multiplayer game or will it just be little quips to give us fans a little more to hang on to? What other characters from the universe would you like to fully see back and not only in a deadite extra? Let us all know in the comments and then discuss it all until dawn. When there is more to get out there for Evil Dead: The Game, we will have it here for you. Be sure to keep checking back in for all of that and much more.