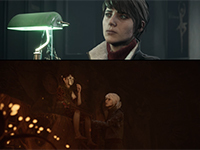 The time is slowly ticking down for The Medium to hit the Xbox Series X and PC. January 28th is still the date if you were a little concerned that this might be something about Bloober Team delaying the title. It is still listed there for now. This seems to be set even further down as we have a whole lot of gameplay for The Medium to take in to get us ready. A whole fourteen-minutes of gameplay that spans all over the place for those that think you might get spoiled on anything. It really only spoils a look at how some of the special abilities we will have to use and that is most of it here.

For those venturing further into what we get to see here for The Medium, we get to see more on how the dual-world gameplay will function. It will be just as we assumed where both sides will move and react while leading into puzzles to move the physical form with the spiritual one. It is nice to see that we will have "Out Of Body" aspects where we will be able to separate from the physical form to move around. All to get some spiritual energy to power things, give us a shield, or give us a way to attack the evil things out there. Even if it does not look like we will be able to do more to The Maw in The Medium than just hide from it. Maybe that will be the huge ending to it all.

Bloober Team, the studio behind acclaimed horror games including Blair Witch, Observer: System Redux, and Layers Of Fear, today debuted an extended look at gameplay from its upcoming psychological horror title The Medium, that showcases the different perspectives, environments and powers players will experience when the game is released on January 28 for Xbox Series X|S and PC.

The 14-minute video sees the titular medium Marianne explore the real and spirit world both alternatively and simultaneously; showcasing the unique split-screen dual reality gameplay system that will see you play in two locations at the same time. Throughout the game, players will be pushed and pulled seamlessly between these two worlds — with about a third of the action taking place in the real world, a third solely in the spirit world, and a third in both realms simultaneously.

Marianne is gifted with a number of psychic abilities she must combine to overcome the threats and obstacles of both worlds, such as the protective Spirit Shield and the more potent Spirit Blast. As she uses her powers to untangle the mystery of the Niwa resort, her investigation eventually takes her beyond the walls of the haunted hotel to other locations, including the mysterious Old Fort showcased for the first time in the new gameplay.

The video also gives players a taste of gameplay encounters against The Maw, the main antagonist voiced by Troy Baker, and reveals one of its unique abilities. Deceitful and insatiable, The Maw just like Marianne can travel between the real and the spirit world, thus chasing Marianne across both realities. In the spirit world, The Maw is visible and can easily spot Marianne, while she can defend herself with the Spirit Blast. However, traveling to the material world makes The Maw invisible but also blind, so it relies solely on hearing to locate its prey there.

Is this what you were expecting to see for The Medium here and will we get to see more like it in the final build? What other special abilities do you think we will get to see here in the game? Do you think it will be too jarring to watch the dual cut scenes through the whole game or will we get used to it? Let us have all of those thoughts and feelings down in the comments and then feel free to discuss it all. If there is more for The Medium, you know we will have it all here for you. Just be sure to keep checking back for all of that and more.