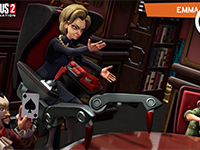 A new breakdown for Evil Genius 2: World Domination offers up a new look at Evil Genius 2 with a bit more information for all

We may not have a release date for when Evil Genius 2: World Domination will hit the PC, but we have a nice and new gameplay video to take in that gives us a whole lot more to take in for the game. A few more of the locations, minions, and a look at the rest of the other Evil Genius characters that are coming back in here. That or will be new to the IP with the four different characters we will get to take control over in their relatively pre-built bases. Bases we can alter and make our own, but ultimately try to take over the world. If that does not work, then we can end it all with our Doomsday Devices we can build too.

There is a whole lot in here for Evil Genius 2 that we already knew out there. There are also some things out there that we might not have known. Things like the last two genius characters we might be playing as. Also the new underboss characters or the returning ones that will have more abilities out there in the base besides just being a miniboss for the agents to take on. Agents that will also be coming in many different flavors than we may have seen before in the Evil Genius history. They are fun little things as we keep looking for a launch, but it is something here to have. Maybe we will see a release date before July too.

Evil Genius 2: World Domination — Everything We Can Tell You

In an underground bunker, deep beneath an island somewhere, the team at Rebellion have been plotting the sequel to the maniacal cult classic, Evil Genius. Our schemes involve new islands to inhabit, doomsday devices to detonate, and forces of justice to trap to your evil little heart's content.

Before we get back to practicing our evil laugh in preparation for its release, here is everything we can tell you so far about the highly anticipated Evil Genius 2.

Are you excited to get this new stuff for Evil Genius 2 or is it more of a tease until the big video with the launch trailer? Will there be more of the underboss characters or will these be all the ones we are going to get at launch? How long until we get a change to the game to add in the ability to build the base from the start? Let us all know down in the comments and then feel free to discuss it all as you wish. If you want to see more for Evil Genius 2: World Domination, keep checking back on the site here. We will keep it all coming to you as best as we can.