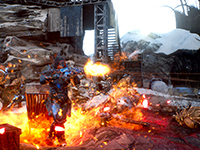 Just as we all thought would happen, it looks like Outriders is now delayed and will be heading to us on the PS4, PS5, Xbox One, Xbox Series X, and PC on April 1st now. Not as a joke, but when it looks like People Can Fly will be able to make sure we have the best version of the game. That is the hope, at least, but we will have to just wait and see for Outriders. That is, unless, you want to give the game a go in a demo form. Something that could help you figure out if you want to throw down for the game or hold off a bit more.

This demo for Outriders will be available for us to give a go on February 25th currently. It looks like it will show off the first few hours of the game out there and will give us a chance to play with all four of the character classes out there. This seems like a weird choice to go with, as it does give us a taste for Outriders but it will make the first few hours of the final build a bit more boring as we will most likely have played all the different ways during the month we will have before launch. Maybe that is the real April Fool's Joke going on with the slow burn. An important update regarding Outriders. pic.twitter.com/HHZrq5GIik

Did you expect to see that Outriders was going to be delayed or does this come as a shock for you? Will you be giving the demo a go or will you be holding off until the full game is out there? Do you think that this demo will spoil the start of the final build or will it only be weird sections to help highlight the game more than anything? Let us all know down in the comments what you are thinking and then feel free to discuss it all. If we find more to share for Outriders, we will have it all here. Just be sure to keep checking in here for all of that and more.