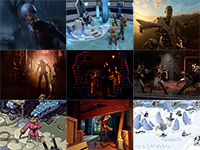 We can finally put a pin in this week and dive into all of those video games we have here now. We had a few more launches this week and still have some others in the pipe, so it is good that this one was not as intense as usual. Even if we did need to spend a whole lot of money picking up that Evil Dead: The Game collector's edition and then lose our minds over The Wolf Among Us 2 in the mix. Do not even get me started on Atomic Heart and then other video games like Assassin's Creed getting a whole new expansion. It may have started out a little rough, but we did end with quite a bang for all of us gamers out there.

Next week will have us all rolling again in more news and updates for our video games too. We do have Forbidden West coming out and a few others we might have some reviews up for. Not to mention doubling down on some of the backlog and other titles we might have new gameplay and videos for too. We are trying to offer up more on our other platforms and moving away from just video games too. Given that the big game is about to happen, we could also see some new and explosive trailers for things. Maybe something new for the Steam Deck. The possibilities are rather high on all of that.