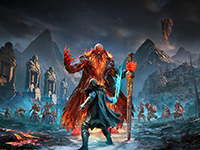 The expansions keep coming for Assassin’s Creed Valhalla and here we go with another one hitting us on March 10th. This one is not just some new areas and missions as we normally get. In fact, Ubisoft is offering us a way to play through these game mechanics as Odin now with the Dawn Of Ragnarök. That is the new expansion for Assassin’s Creed Valhalla just in case you did not catch on as of yet. Something that will be hitting the PS4, PS5, Xbox One, Xbox Series X|S, and PC for a small bit more to the game in cost. Not too bad for what it is going to offer up to us all, though.

As mentioned, in this new expansion, we will be taking on the role of Odin as he sets out on a new mission to save Baldur. He will have access to all of the usual Assassin’s Creed mechanics in the game as we head out to the different realms, but there will also be a few new ones mixed in. Odin is a god and will have some special bracers made for him after all and we will need to put them to some use. That use being able to absorb the powers of the giants out there for some buffs and debuffs. Now to mention the fact that Odin will be able to take the form of the Assassin’s Creed bird and use that to get around the game world. That will certainly change things up a bit more than before.

The more interesting part, as this is all based on having visions as we did in the core story of Assassin’s Creed Valhalla, all of this will carry over to the core game. My guess is that it will be in some extra resistances and skills, but it is described that the powers of Odin will transfer too. That would make a huge deviation from the past with the Assassin’s Creed titles and I am not sure how I feel about that. Thankfully, we only have to wait a short bit to be able to give it all a go. I am interested to see how it goes and if this will be how they keep the IP rolling as they work on the next major installment.

Journey into a realm of Norse myth and embrace your destiny as Odin! Learn everything you need to know about Assassin’s Creed Valhalla: Dawn Of Ragnarök, available March 10th!

Did you expect that you would ever be playing as the gods in any of the Assassin’s Creed titles or did you always want it a bit more grounded? Do you think that the main story here will build into the larger narrative or will it be its own isolated thing? How do you think the supernatural elements will transfer over or will it be in the form of a bit less damage over time? Let us know what you are thinking down in the comments and then feel free to discuss it all as you wish. We will keep sharing all that we can for Assassin’s Creed Valhalla, so be sure to keep locked into the site. You will not want to miss a single thing.