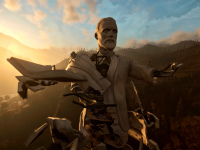 Another villain from the past is finally back out there and doing what he does best in Far Cry 6. Joseph Seed is back in the mix and Ubisoft is trying to round out more of this cultist story with the latest DLC that has hit the PS4, PS5, Xbox One, Xbox Series X|S, and PC. Those that have been following along for a while now will know this as the big bad from Far Cry 5. Those that have been following along even longer will also know how that all ended and how it almost ended the line of stories out there. Thankfully, that is not the case and maybe we will get to see a bit more of the fever dream that was had that brought upon these end times.

This looks to wrap up this part of the content that has been coming back into the Far Cry for now, as it gives us control of Joseph to see just what his mind was going through in a bit of gameplay here. One could argue that it is a bit on the insanity side more than a control side, but we are dealing with a cult leader here and those are some regular bedfellows to have together. The bigger thing, though, is that it will let us all find out if Joseph was right in what he had planned. Since his inner demons did help spawn a different Far Cry spin-off, there could be some merit to it all. Even if we will be fighting off former followers in the mix of all of this.

Play as Joseph Seed! Get up to 25% off the Far Cry 6 Season Pass and instantly unlock Vass: Insanity, Pagan: Control, and Joseph: Collapse DLC episodes. Those new to Far Cry 6 get up to 40% off the Gold Edition for a limited time (Game + Season Pass). WAS JOSEPH RIGHT? Step into the mind of Joseph Seed from Far Cry 5, playable in co-op, and battle your inner demons. Explore a twisted version of Hope County, fight your former followers, and confront your family members. Joseph: Collapse is available now.

How have you been enjoying all of these blasts from the Far Cry pasts? Do you think we will see any others added in from even further back or will it just be these bigger names? Could all of this be in Joseph's head or will there be a bigger explanation behind it all? Tell us what you are thinking about all of this down in the comments and then feel free to discuss it all if you so wish. We will keep sharing what we can for Far Cry 6 as it comes. Just be sure to keep checking back in for all of that and much, much more.