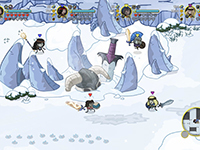 It looks like it is finally going to happen, as we have a final release date set for Conan Chop Chop. Talk about a game that has been delayed so many times, but Mighty Kingdom has pushed through and brought it all to a place where we will be able to give it a go. I am also sure that Funcom is ready for this too with how much they have pumped into Conan Chop Chop up to now as well. That is why we should all be glad to see the game finally hit the PS4, PS5, Xbox One, Xbox Series X|S, Switch, and PC on March 1st. Not too far off, even if April 1st would have worked better for the joke of it all. This did all start out as an April Fools joke before turning into what we are about to get.

In addition to the release announcement for Conan Chop Chop, we have a few other tidbits to take in too. Obviously, there is a new trailer to show off how the game has developed up to now and how the four-player online and offline co-op will function out there. A nice little tidbit if you are looking to get a solid couch co-op game going too. Not to mention, something that you might be able to give a go here before the official launch. The PC and Switch versions of Conan Chop Chop will be offering up a demo for you to try out before you buy on February 21st. Give it a download and test it all in just over a week. I do hope it was all worth the wait.

With its hilarious take on Conan the Barbarian’s world, Conan Chop Chop puts players into the leathery sandals of some of Hyboria’s greatest heroes as they battle to stop the treacherous wizard Thoth-Amon, evil incarnate and not a very nice guy. Cleverly positioned as a rogue-lite party game, with special emphasis on party, players get to throw themselves head-first into a 1-4 player multiplayer mayhem in both online and couch co-op. It has magically created maps, trillion of item combinations to loot, and an eclectic cast of curious critters ranging from self-replicating chickens to icky brain-spiders.

Were you starting to think that Conan Chop Chop was never going to come out or did you hold the faith this whole time? Do you think it will have all been worth the wait or will it still have needed a little more time to cook? Will you be looking to give the demo a go or will you hold off until the full release of it all? Let us all know down in the comments and then feel free to discuss it all. If we have more to share for Conan Chop Chop, know that we will have it all here. Just keep checking back in for all of that and everything else that we have to offer up on the site.