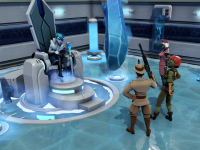 Things are getting cold in Evil Genius 2: World Domination as we have a new Evil Genius entering the world stage

If you thought you had too many geniuses in the basic version of Evil Genius 2: World Domination, get ready to have your mind blown as we have a new one on the way and taking over the world now. The next campaign pack is out there now from Rebellion and it is adding in not only more story and décor to the mix, but we have a whole new evil genius with their own lair and goals to put forth. All while taking on the five seas of the game world and the new Agents that will try to thwart our every move out there too. Get your freeze guns ready to take it all over with the Oceans Campaign on the PS4, PS5, Xbox One, Xbox Series X|S, and PC.

In this new DLC, we are getting the evil genius of Polar that looks and feels a bit like a gender-bent Mr. Freeze. This includes the arctic lair for us to launch from and all of the cold-based minions we could need too. In addition to all of that, we are getting an array of underwater and submergible elements mixed in as we take some of the fight under the seas out there. Obviously, this means we will have some new Super Agents and others that will sneak in as we try to keep things climate controlled in the mix. I am curious to find out how this evil genius will run the cover operation to keep funds flowing in, but I guess we will just need to download and play to find all of that out for now.

Train an army of eccentric Engineer minions who will tinker away in their Workshop to create and maintain your fleet of submarines, and an array of deadly turrets.

Your minions will need to keep warm as the new temperature system means their productivity and equipment will be affected if they get too cold or too hot. Place heaters and air conditioning to ensure optimum efficiency.

Go under the radar and explore the five Oceans for sinister new schemes, but watch out for the Forces of Justice! Do-gooder divers and a new armored Super Agent have reached you through your criminal intelligence network. Perhaps given the right persuasion, this Super Agent can be turned and become a valuable Henchman?

Are you excited to finally see a new evil genius in the mix and will it all blend in well for this one? How do you think the heating and cooling aspect will function or will that be more of an aesthetic thing than a mechanical one? What do you think the cover will be for this one as we build up to the Doomsday Device or will they purely work in the shadows and nothing more? Let us all know what you are thinking down in the comments and then feel free to discuss it all. As more for Evil Genius 2: World Domination rolls out, we will share it all here. Please keep checking back in for all of that and everything else we will have to offer up.