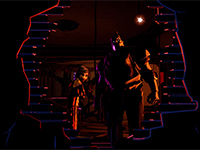 Get ready for more Bigby and crew with the true reveal for the second season of The Wolf Among Us. It feels odd saying that, as we already knew that the new Telltale Games was working on it all, but now we have something to truly look at for the game beyond a title screen and word that they are working on it. Even if we still have to wait for this new addition to The Wolf Among Us to hit the PS4, PS5, Xbox One, Xbox Series X|S, and PC in 2023. Hopefully, it is early in 2023, but at least we have something new to take in and go with for the game. Especially as it prequels more for the comics that have been out for a while now.

As was mentioned, The Wolf Among Us is going to be another episodic affair for us all to take in. I know that has gone a little out of style for most titles out there, but this is what the team did best before. As long as there are not huge gaps between each release, it should work out fine. Especially as we get to see some of the Wizard Of Oz characters showing up and causing some kind of issue out there for us to clean up. This is something that will set up and continue through the first episode of this season for The Wolf Among Us, so I can only imagine where it will go after this. Not to mention if that is actually Dorathy sitting on the couch watching things go down or if it is someone else. We are just going to have to wait, I guess.

The Wolf Among Us — Season 2 Reveal

Here’s the full trailer for The Wolf Among Us Season 2.

How are you feeling about the new season for The Wolf Among Us and how it is looking here? Do you like seeing some of the new fables mixed in here or did you want more of what you already know? Do you think the episodic nature will work out for the team here or could it crash and burn as we saw once before? Let us all know down in the comments what you are thinking and then feel free to discuss it all. As more for this season of The Wolf Among Us flows out there, we will share it here. Just keep checking back for all of that and everything else we have to offer up.