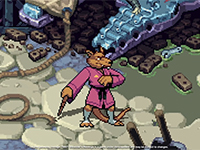 Another character is joining in the fight for Teenage Mutant Ninja Turtles: Shredder’s Revenge by the way of Master Splinter now. A character that we generally do not get to see fighting out there, but Tribute Games and Dotemu have opted to give us a look and taste of all of that. This would be a character that should be out there to bring Shredder down while front and center. Now he will join his Ninja Turtles in the game and give us just another option to play when the game does finally hit the PS4 and Xbox One. The Switch too, but that will be a bit further down the line for those looking to play it all there. We still have no date on that, so it could be a very short wait after all of that for now.

All in all, Splinter does not look like he will change up too much for Teenage Mutant Ninja Turtles: Shredder’s Revenge here when it comes to the core combat. This is a good thing as it will help keep the pacing and not force any one character over another. He will have his own special attacks that he can unleash in the mix, just as all of the other Ninja Turtles, and you can see some of the better ones in the following trailer here. It is interesting that Splinter glows pink when it all goes down, but my guess is to make him stand out a bit more on-screen and not blend in with the other three characters and all of the NPCs in the fight. Have a look at it all and see what we should be getting soon. Now we just have to hope for a few more of the heroes to join the half-shelled crew.

Teenage Mutant Ninja Turtles: Shredder’s Revenge is coming to PlayStation 4 and Xbox One, in addition to the previously announced PC and Nintendo Switch, later this year.

Master Splinter’s calm, thoughtful nature makes him more collected than most of his green pupils, but his mastery of ninja arts ensures that he’s a formidable powerhouse. He dishes out particularly powerful attacks with his trusty staff and wide-reaching special ninja moves, bashing through groups of enemies as efficiently as the Turtles chowing down on a pizza.

Are you amped to see that Splinter will be joining his Ninja Turtles or was it always better when he was a behind the scenes character? Do you think the pink will have some other reference in the mix or is it a gameplay element that we should just look at? Do you think we will get Casey Jones in the fight or any other heroes or will this be it? Tell us all what you are thinking down in the comments and then feel free to discuss it all. More for Teenage Mutant Ninja Turtles: Shredder’s Revenge will be coming, so please keep checking back for all of that. We still need a release date for it all, so we will have that update at the very least.