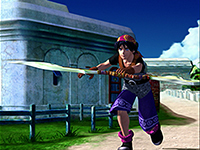 Chrono Cross is getting a remaster for the current-gen systems with the Chrono Cross: The Radical Dreamers Edition

The rumors and speculation of a past Chrono title coming back seem to have panned out, as we have the Chrono Cross: The Radical Dreamers Edition coming our way now. Many may have been hoping for a full remake or remaster of a different title from Square Enix, but this is the one we are all going to get here. A new way to play Chrono Cross on the PS4, Xbox One, Switch, and PC with new 3D models, better background music, and other enhancements that should make combat flow a bit better. All of which on April 7th of this year. Even if it is not the one you wanted, there is still something to look forward to. Even if there is yet another hint that the one of the Trigger variety could still be on the horizon.

That all said, we have a new video to look at for this Chrono Cross remaster just a bit lower. A trailer that definitely shows it is all coming, but nothing about it feels like it is a true remaster. Almost all of this looks like it was pulled from the original gameplay from decades ago. This rather points to the fact that this could just be a port that has been made to run on the newer hardware than a true remaster of Chrono Cross. All of which also feels like this could be the teams checking to see if the IP still has some relevance in modern times. This leads me to speculate that they could be working on the other title in secret, as they like to do, and this is just a taster of what is to come. That is all wishful thinking at this point and I will just be glad we are getting this remaster of sorts at the very least.

Chrono Cross: The Radical Dreamers Edition is a remaster of Chrono Cross, including new features such as 3D models converted to HD, higher-quality background music, and battle enhancement features. Also includes the game that formed the bedrock of the story, "Radical Dreamers - Le Trésor Interdit -"

With over 40 party members to meet, people and dimensions will intertwine in this epic drama about the planet itself.

Was Chrono Cross one of the titles from the past you wanted to see remastered for the current-gen systems? Were you hoping to get to see a new version of Chrono Trigger instead? Do the visuals of this just feel like they took the PS1 version and made it run on the newer systems or will we see some true remastering when it finally drops out there? Feel free to let us all know what you are thinking down in the comments and then feel free to discuss it all as you so wish. We will share more for the Chrono Cross: The Radical Dreamers Edition if we have more to share. Please keep an eye on the site and our socials to be up to date on all of that as it comes.