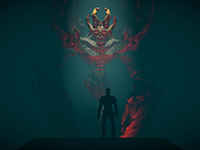 On February 15th, Poland-based studio Superstatic will release Liberté into Steam Early Access. Liberté is a story-driven, top-down roguelike set in an alternate-history, Lovecraftian version of the French Revolution.

A unique blend of fast action and deck builder games.

The game’s core gameplay revolves around a unique combination of fast-paced combat and deck builder mechanics, inspired by classics like Slay the Spire. Every time Players venture into the game world, they start out with no abilities or bonuses. With every conquered challenge, they draw a card from their personal decks. By playing cards, they gain skills and talents that work together to create powerful combos.

Liberté launches with over 100 unique cards for players to collect and assemble into powerful decks.

Liberté begins on a high note when the coronation of France’s new king is brutally interrupted by the appearance of otherworldly horror. The event causes the whole city to tumble into anarchy, with four factions vying to use the supernatural cataclysm to seize power.

At the moment of launch, Liberté’s story content takes around 35 hours to complete, with the script containing over 33,000 words. When the game exits Early Access at the end of 2022, Superstatic expects it will take around 60 hours to complete the full story.

The game features a Story Mode, which simplifies the combat and allows narrative-focused players to fully concentrate on the storytelling part.

Purchase Liberté on Steam when it launches on February 15 and change the fate of four unique factions in their clash for power.