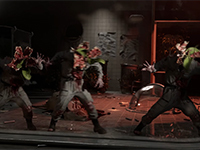 Things are continuing to get a bit weirder for Atomic Heart as we all wait just a bit longer to see what this title will have to offer up. It has been a good amount of time since we saw the first glimpses of the game from Mundfish and very little has been answered as to what is going on. We all do know that Atomic Heart will be a first-person action game that will have us using firearms and special powers from our other hand, all while set in a weird version of the USSR. Now we can add in that it will hit the PS4, PS5, Xbox One, Xbox Series X|S, and PC in 2022 on *******ber. The confusion continues…

Yeah, that does not clear things up and feels like it is a bit of a trolling way to say Q4 2022. It still lets us all know that Atomic Heart will be coming near the Fall and Winter of the year but still leaves things quite vague. I guess it is a good thing we also have a new trailer to look at that has all of the fun gameplay mixed right in that we could hope for too. New bits that highlight a lot of what we spoke of and have seen before, but with some different areas. That and that Atomic Heart will have some form of rogue robot uprising and plague out there that we will have to face off with. It is weird and I think I like it. Have a look just a bit lower for this new trailer and get ready to wait.

Check out the release window trailer for Atomic Heart, the mysterious first-person shooter from developer Mundfish. We're starting to learn a bit more about it, though. The team describes the game as "an action-packed first-person shooter set in the alternative, retro-future version of the 1950s USSR." Atomic Heart will be out for PC, PlayStation 5, PlayStation 4, Xbox Series X|S, and Xbox One. And yes, if that soundtrack sounds a bit familiar, it's because it is indeed being done by Mick Gordon (DOOM, DOOM Eternal).

When do you think that we will see Atomic Heart and will it be before the speculated times? Do you think it fits a little too close to the BioShock realm of games or will that help it out a bit? Do you think that some of the models in the world feel a bit downgraded or is that just due to the time we have had to wait for something new? Tell us all of your thoughts on this down in the comments and then feel free to discuss it all. More for Atomic Heart has to be coming, so be sure to keep checking in here for all of that and much more.