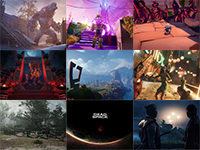 That is a wrap on another fun week with all kinds of video games out there. Some had some big news and others just slight updates for us all once more. It was also nice to see smaller titles like Faraday Protocol and Fracked get some fun additions in there and were able to hang with other video games like Dead Space and Deathloop that had some solid highlights. Yes, I did say Dead Space if you missed that before. We are getting a remake and was definitely one of the bigger tidbits of the week here. So exciting to see and hear even if it was only a slight look and announcement more than anything.