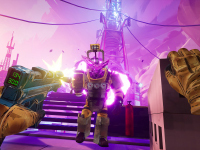 The time is quickly coming for us all to be that virtual action star again with the release of Fracked. The release date is now finally set for this by nDreams and it looks like it will hit the PSVR and PS5 on August 20th now. Not the far end of the original Summer of this year announcement as it could have been. Especially when you take in the fact that you technically do not need to wait until then to get a taste of what Fracked will be bringing us. I am not talking in the way of a new trailer for the game, even though we do have that to share with you today as well.

In addition to the following trailer we have for Fracked, there is also a demo out there for you to download as you are reading these words. All you need to do is fire up that old PS5, download the file, strap on your headset, and then dive into the world of this action star. You are so close to being able to ski down some mountains while shooting at some bad guys out there or take some cover to have an epic shoot out in a warehouse. You get the idea for Fracked from that or now the trailer you can watch as the demo downloads in the background of it all. Have a look and get excited to see how the first thirty minutes of the game will play out in our headsets.

We're thrilled to announce the public demo of Fracked for PS VR, which is available on the PlayStation Store right now! Play the first thirty minutes of the trailblazing and action-packed campaign, pitting you against the interdimensional enemies known as The Fracked.

Become completely immersed in the remote Alaskan mountains, with total freedom of movement, an interactive arsenal of fun weapons, and grabble cover.

Are you excited to see that Fracked will be coming in the not too distant future or did you think it was going to aim for the true end of the summer? Do you like how it is looking in terms of the action star side of things or do you think it could be a bit much for VR? Will this be a free-roaming title or will it be more on rails to make things easier? Give us those thoughts down in the comments and then feel free to discuss it all if you so wish to do so. We will drop more for Fracked as we get it, so be sure to strap into the site for all of that and more. I know I am hoping to see more VR stuff flow out there soon.