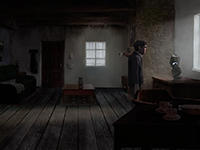 One more horror title is coming to the PC this October with the announcement that Saint Kotar will be joining the list of horror during the month there. The best time of year to drop a game like this and Red Martyr and SOEDESCO will be doing what they can to do this. It does not bring it over to all of the other platforms that we have had announced for the game so far, but that does not change the fact. Sadly, we do not have a specific day that Saint Kotar in October to look for either. We just get to know that it will be during the month and we only have the thirty-one days out there to keep an eye on. If they do not give us a solid date before the month rolls up on us.

Saint Kotar is a story game that uses the traditional point-and-click style of gameplay to help our characters move about this weird world. There is a plagued town out there and there is all kinds of mysteries mixed in with it all. That will give us branching storylines and multiple endings to explore in Saint Kotar due to all of this too. Just the nice things we can enjoy and see how witchcraft and the occult will be handled here. The following video we have to announce this window does try to take us along those lines. Have a look at the video and see if it will be something that you will be happy to add into the library of your titles.

Saint Kotar is coming to Steam, Epic Games Store, and GOG in October 2021!

In this story-and-choice-driven point-and-click psychological horror game with branching storylines and multiple endings, you take the role of Benedek and Nikolay. These two troubled godly men go out to search for a missing woman in an ancient rural town plagued by macabre murders and strange phenomena, which are allegedly related to occult rituals of devil worship and witchcraft.

When do you suspect that we will see Saint Kotar drop on us during the month of October? How many different endings will we see here in the game with the options we might have presented? Do you think that we will be able to go down some of the darker aspects of the setting in this title? Tell us what you are thinking about all of this down in the comments. If there is more for Saint Kotar, I will try to share it on the site for you here. Just be sure to keep checking in for all of that and everything else that we could have in the mix of it all.