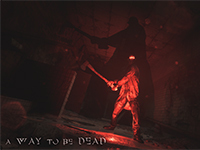 A Way To Be Dead

It is time to head out and try to survive another zombie title with A Way To Be Dead hitting us on the PC with an Early Access right now. This would be the latest title from Crania Games to hit us and will bring a new 4v1 asymmetrical title where we will be victims of some horrible experiments and need to survive killers and zombies out there. With A Way To Be Dead allowing us to be the zombies in the game too so we can hunt down and kill all of our friends in the game or take on any of the other randoms that could be in the multiplayer mix of it all. It is an Early Access so we will certainly see quite a few randos in the mix too. That is the thought of it all for me right now.

I will say that the trailer we have here for this soft launch for A Way To Be Dead does make it look nice and dark for us to take on. It also looks like the environments will lend much more to the terror of things with things being much more organic and flowing so we will always have things moving in the backgrounds. This can make it harder to try to spot those undead out there or the doctor that is running around too. That is all based on the trailer we have here for A Way To Be Dead. Have a look and see if it will be something that will suck you in and see it expand much further down the line. I have a feeling it could be if the team is able to use the Early Access the right way.

A Way To Be Dead — Launch Trailer

A Way To Be Dead is an asymmetrical multiplayer (4 vs 1) horror game where a bewildered doctor is on the hunt for a group of victims who are just trying to escape. Players can take on the role of Dr. Riley, the victims, or even the zombies, as the action unfolds in the same universe as Roots of Insanity, Crania Games' previous game. As the frenetic multiplayer action ensures, the player witnesses the events of Roots Of Insanity from an entirely new perspective.

Have you been waiting for a game like A Way To Be Dead to hit us or will you be holding off to see how it evolves? Do you think that the movement in the background of the world will make it harder to survive or will it just add to the horror of it all? Do you think we will see more trolls out there for the game or will it stay a nice blending of it all along the way? Give us all of those thoughts down in the comments and then feel free to discuss it all if you so wish to. We will keep the news for A Way To Be Dead flowing out there for you as best as we can. Just be sure to keep checking in for all of that and much more.