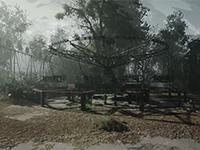 The split release for Chernobylite is almost upon us with it fully hitting the PC on July 28th here with little knowledge on when it was going to hit the PS4 and Xbox One. Let alone when we will see the full next-gen version of the game on the PS5 and Xbox Series X, but The Farm 51 is still working on all of that. What they seem to be wrapping up for Chernobylite shortly after the release next week is that we will have it on the older consoles on September 7th now. Yes, we have a release date for that version now so console gamers can try to dip their toes into the game here in short order too. Always great news even if it is a bit split more than some of us would have hoped for.

To go along with this new and small announcement, we have one more look at Chernobylite and how the team has taken scans of the actual Chernobyl site out there. They have taken a great amount of time to 3D scan it all and builds upon it for the story while keeping it as close to the real world side of it all more than anything. Some of it we have seen in the past, but it is a nice way to see how the wire meshes are laid over the real objects to see what is new and just for Chernobylite here. More or less, it looks like accents and then some textures to add to the horror and tone of t it all. It is still a huge selling point to have and look forward to for it all. Have a look and get excited too.

Visit the site of the worst nuclear disaster in history.

In Chernobylite you can explore a 3D-scanned recreation of the whole Exclusion Zone, a desolate area that was once full of life and hope. See a comparison of footage of real-life Chernobyl landmarks and their recreations in the game. It’s eerie how similar it is.

In additional news, the console release date for Chernobylite has been revealed! Console players can delve into the Zone on PlayStation 4 and Xbox One on September 7.

Have you been to Chernobyl yet? Do you plan to go? Play Chernobylite and uncover the secrets of the Zone.

Chernobylite is a science-fiction survival horror RPG, mixing the free exploration of its disturbing world with challenging combat, unique crafting, and non-linear storytelling. Try to survive and reveal the twisted secrets of Chernobyl in the 3D-scanned recreation of the real Exclusion Zone.

Are you glad to see that Chernobylite is not going to be too far off from the launch of the PC release here shortly? Do you suspect we will have to wait a few more months for the next-gen version or will it be way further down the line instead? How do you feel about the new geometry added to the scans here and is it cool to see that it is only basic elements and nothing that will drastically change it all? Give us that feedback and all of those thoughts down in the comments and then feel free to discuss it all if you so wish. We will keep the updates for Chernobylite coming to you here as best we can. Just be sure to keep checking back in for all of that and everything else that we can find out there for you.