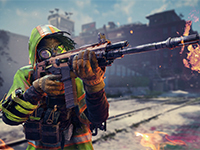 Those thinking we might have been running low on the arena shooter line of games out there, we are here to help announce Tom Clancy’s XDefiant will be another to add into the mix on the PS4, PS5, Xbox One, Xbox Series X, and PC. All as a new free-to-play style of game from Ubisoft set in the Tom Clancy space of everything. This should cover all of the cards out there for the different versions and style games that we can have from this IP. More so, when you look at how the characters in the game will be based on those from others with a few new ones mixed right in to keep things fresh. They need to offer up something new to keep those fans off their other games and in on this one when it launches.

In Tom Clancy’s XDefiant, we will need to choose a faction, which will also define our class. From there, we will get a lot of the traditional arena shooter style of things with the fitting cosmetics and gunplay we know from the games. That and a bunch of levels inspired or pulled from the IP up to now with everything laid out for us to be able to sneak, snipe, and run-and-gun our way to the top of the matches we find ourselves in. There could be more to it all, but it sounds like a rather basic arena shooter for now. Of course, on August 5th we could learn a bit more about Tom Clancy’s XDefiant with the first playtest going live around then. everyone that wants to can sign up for the test and see if you are let in. Then you will get a better idea if this is something you will want to let live on your devices or give just a single play and call it a day.

Welcome to the party! Tom Clancy’s XDefiant is a free-to-play, fast-paced arena shooter that combines intense gunplay with personalized loadouts and specialized factions, as teams of gunfighters — called Defiants — battle for domination.

The first test starts on August 5 for PC players in the US and Canada.

Personalized Playstyle: Personalize your Defiant to match your playstyle. Choose your faction, traits, abilities, and ultras. Select from an arsenal of primary and secondary weapons, attachments, and a device to complete your loadout — then tweak it on the fly to adapt to an ever-changing battlefield.

Competitive Clashes: Tom Clancy’s XDefiant offers a variety of competitive 6v6 arena and linear game modes, such as Domination and Escort. Combine that with a large pool of uniquely designed maps in rotation and no two matches will feel the same.

Diverse Factions Of Defiants: Wolves, Outcasts, Cleaners, and Echelon factions battling across iconic locations is just the starting point. We’ll keep adding to our cast of Defiants as the game evolves, drawing on a range of characters and abilities from the Clancy universe and beyond.

Do you think that the Tom Clancy line needed a free-to-play arena shooter or is it better done through other video games out there? How do you think it will differ from the normal style of it all or will we see just the same thing with a new skin on it? Do you like the idea of tying abilities to the factions or should each faction have its own run of classes to allow for the full range of freedom out there? Give us all of those thoughts down in the comments and then feel free to discuss it all. If and when we have more to share for Tom Clancy’s XDefiant, we will have it all here. Just be sure to keep checking back for all of it and much more as we head off into the future.