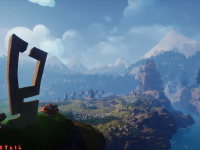 The myth of the Baba Yaga is getting another big story to expand things a bit more with Blacktail. The first-person title that The Parasight is working on and announced not too long ago. It was a thing that has been set up and a thing we know will hit the PS5, Xbox Series X, and PC. Also something that will want to draw us all in and get us deeper into the world crafted real and fictional here. Blacktail is doing this a bit more by mixing in more of the Slavic folk lore and now music into it all. Now you can get a taste of the soundtrack that will be playing in the background and get you in a better mindset of it all too. Maybe this is not the most exciting update for it all, but it is something that could build up a bit more hype for it all.

The song we have here for Blacktail is called Summer and is a mixture of traditional vocals and throat singing as well. There is also a fun little remix to the song that will be mixed into the game too but it is a nice and mellow song I can see playing in the background of the game. I can see it showing up in a few different places in the game, so it will be interesting to see how and when it does show up in Blacktail. If anything, we have the taste of it all here. Hop on down and give it all a listen so you can get the hype levels raised up a bit more.

Create the myth of Baba Yaga by living out the origins of this classic Slavic folk story in Blacktail, the first-person action-adventure from The Parasight. Experience a one-of-a-kind blend of intense archery combat and dark storytelling. Solve the mystery of missing children and shape your own legend by becoming the keeper of the forest or a lost child’s worst nightmare.

What do you think about the music we have here for Blacktail and can you see it mixed in well for the base of the game? Do you think it will be something in the background or run during the credits of the game instead? Will things get a bit darker with the music and the themes or will it stay a bit more lighthearted as this one slightly is? Let us all know down in the comments and then feel free to discuss it all. If there is anything more for Blacktail, we will offer it up here on the site. Just be sure to keep checking back for all of that and much more.