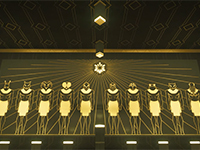 The tease is almost over for Faraday Protocol as the final release of the game is almost here. Almost here and set up to hit the PS4, PS5, Xbox One, Xbox Series X, Switch, and PC this August. Just a few weeks from now we can be taking this new puzzle style game from Red Koi Box for a spin. A few weeks with the fact that Faraday Protocol is now set to hit us on August 12th on all of those platforms listed, so there is some great news to have to start the week here. If you have been looking forward to this one since we first heard about it all not too long ago at this point. You have to love that style of development out there.

Now that we have an official release date for Faraday Protocol, we can now take in the new trailer to see how the in-game gun will have us solving puzzles and traversing the game's world. Something that all feels like a bit of Portal and a few other titles with the Art déco games like BioShock popularized so long ago. If looking at a video of it all is not your jam, you can currently download a demo for Faraday Protocol on your PC to give it all a try and see if it handles the same way that it looks. I have a feeling that it will as the gameplay style is more or less the basics we can expect, but it is always nice to have a good feel for it if we can.

“Endothermic organic hydration complete. Coordinates reached”. As you deploy from your spaceship, you find yourself in a mysterious place. Your name is Raug Zeekon, from planet Cunor. Your motto: “Explore, Exploit, Expose”. Solve complicated puzzles and discover the hidden secrets of Opis.

In Faraday Protocol, which will release on August 12th, you take the role of the interstellar Archaeologist Raug Zeekon on his quest to explore the mysterious space station OPIS. What happened to this place and what is the role of the enigmatic A.I. IRIS?

To solve the puzzles of OPIS you use the so-called Bia-Tool. This alien utility allows Raug to absorb certain forms of energy and redistribute them, activating and manipulating the machinery on the space station.

You can activate and deactivate power lines and devices with orange energy — or bridge and re-route them using the blue energy.

You'll have to solve many interesting and challenging puzzles, inside and outside OPIS' Ziqqurats, to progress and solve its many mysteries!

Have you been waiting for Faraday Protocol to come out or did you lose track of it since the first announcement of it all? Do you think it will mix up the basics of the gameplay we know or will it be the same as we can expect from it all? Will you be giving the demo a try first or will you only go for the full version of it all instead? Give us all of those thoughts down in the comments and then feel free to discuss it all if you so wish. We will keep sharing what we can for Faraday Protocol as it comes out there, so be sure to keep your eyes on the site and everything for all of that. I hope we will have a lot more of it all.