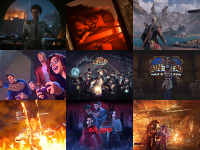 That puts a final wrap on this week and all of the video games we had to look at and get excited for here. On top of the big review we had for Circus Electrique, we also had D23 and a whole lot of other updates for various titles out there. Cyberpunk 2077 has some new DLC on the way, God Of War: Ragnarök showed off the new realms we will be able to explore, and Evil Dead: The Game expanded itself just a bit more to keep us all busy this weekend with so many video games out there. As long as you are willing to dive in and give them all a solid play instead of heading out to the various conventions going on out there currently.

As we head on to the next week here, I do need to warn you that we are going to be very light on the various video games that will be announced during the week. There are some personal things going on over here that the offices will be closed for the next week. We will share some of the various trailers for the video games out there currently, but we will not be able to take our normal deep dives into the finer details of the content. It is the best we will be able to do, but then will be back after that to get back into full swing and, most likely, play a bit of update with what fell through the cracks during the time off.