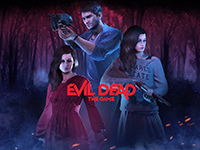 The Evil Dead from the past is finally making a showing into the current version of Evil Dead: The Game

Here we go with Evil Dead (2013) back into the limelight with the latest DLC we have added to the big game. This is all with the characters that Boss Team Games has been showing off up to now with Mia and David coming to the game as part of the Season Pass or standalone. There is also the Plaguebringer demon added in too, but that is more of the Army Of Darkness that we have had in Evil Dead: The Game already. No matter the case, today is the day that we have new survivors and demon added to the PS4, PS5, Xbox One, Xbox Series X|S, Switch, and PC. We just now have a bit more to know for those that are waiting to see if they want to pick them up in the game if they did not go with the Season Pass.

When it comes to the new characters for Evil Dead: The Game, Mia is a new Warrior character and David is a new Support character. To mix things up a bit, Mia is able to become immune to possession in the match all while increasing damage the more fear Mia has in them. A massive bit of damage could easily come about from all of that and quickly shift a fight if planned correctly. Then we have David, that is able to reduce damage and fear to the surrounding characters too. This duo might not be the best to have in the same match when you read all of that, but that could just be as it is written here. Maybe the new weapons they will have in Evil Dead: The Game will shift that perspective a bit. As long as you want to use the Nail Gun or Syringes to take down all of the deadites in the land.

Let it rain blood! The Evil Dead 2013 Update is now live for Evil Dead: The Game.

Play as Mia and David from Evil Dead 2013, a new single-player mission, and more!

Available now, the Evil Dead 2013 Bundle DLC introduces new Survivor characters from the hit film: Mia and David Allen. The update also includes a free new single-player side mission and two new weapons that Survivors can use to help fight evil – the Nail Gun and the Syringe.

A Machete weapon master able to become temporarily immune to possession, Mia’s unique power raises her damage as her fear increases – the more scared she is, the more damage she’ll deal. David, meanwhile, is a beacon of hope for the team, able to reduce fear and damage taken for himself and nearby allies as he dishes out the hurt. The DLC also includes an alternate Mia outfit and Mia ‘screamer’ image skin. The Evil Dead 2013 Bundle is free for Season Pass 1 owners and available to purchase standalone.

How do you feel about Evil Dead (2013)'s characters we have here and will you soon be using one of them as your main? Do you like of the duo is more or less opposites or will that be a blessing in disguise during the matches? Who do you think will be next on the list to get added into the game or will we just be seeing new cosmetics for a bit now? Let everyone out there know what you are thinking down in the comments and then feel free to discuss it all as you so wish to. We will keep sharing all that we can for Evil Dead: The Game, so please keep checking back for all of that and much, much more to come.