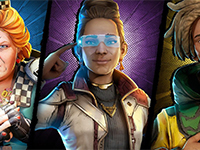 If Borderlands is known for anything, it is known for having some odd and over-the-top characters for us to experience out there in the world. Sometimes they can be a bit much and other times it feels like Gearbox Software just wants to punch us all in the feelings. That might be the plan for some reason, and it could be something hidden in the upcoming title. Here we go with a solid look at the characters we are going to get to experience in New Tales From The Borderlands as well as play with when it hits the PS4, PS5, Xbox One, Xbox Series X|S, Switch, and PC on October 21st. We might need to have some more preparation for it all…

In the following trailer, we get a look at the new cast in the Borderlands with Fran, Octavio, and Anuradha. One out for revenge, one out for fame, and one out for making the universe a better place respectively. This also means that most of the characters we are going to get to experience will be just as dumb and selfish as we have always seen in the IP's history. This is not a bad thing, but for those that might be getting burnt out on the Borderlands cycle, it is worth noting. Going with that mindset might also get us ready to dive into it all again so we can look past all of that and enjoy a nice little story in the mix once more.

New Tales From The Borderlands — Characters

Facing impossible odds and only armed with their dreams and ambitions, three nobodies band together to change their circumstances… and possibly the world.

Within the perpetually war-torn metropolis of Promethea, you’ll control Anu, Octavio, and Fran on the worst day of their lives.

🍨Fran Miscowicz: A hard-working woman running her family’s Frogurt shop, Fran answers to no one. Attacked out of spite during the Maliwan invasion, Fran’s trying to put the pieces back together but life has other plans for her.

💰Octavio Wallace-Dhar: As Meridian City’s most popular citizen - at least in his own mind - Octavio is looking to be a Somebody. His big break is on the way and then comes the big payday!

🧪Dr. Anuradha Dhar: The socially awkward genius who stumbles into an invention that could change the fabric of society itself. Anu dreams of a world where no one has to kill to get ahead.

In this cinematic thrill ride, what happens next is up to you! Meet a motley cast full of misfits, assassin bots, and talking guns in this race to the top! Fight back against exploitation and corporate greed in this narrative-driven adventure.

It’s time to Make Mayhem Your Business! New Tales From The Borderlands is coming on October 21st!

If this has made you further interested in New Tales From The Borderlands, and you do not care about spoilers, we also have a better showing of these characters in a nice new bit of gameplay. A whole lot of gameplay with almost twenty minutes of it just a bit below. It is hard to say where it takes place in New Tales From The Borderlands, so be warned, but it will offer up a look at how the narrative will flow and then how some of the QTE combat will function too. I know that was something I was worried might have been put to the side with the new team taking over the development of it all. This does help to lend it to be closer to what made the original so special in the mix. We will only have to wait and see for now.

Your First, In-Depth Look At New Tales From The Borderlands!

Familiarize yourself with playable characters Anu, Octavio, and Fran in this nearly 20-minute-long gameplay clip.

In this reveal, our three lovable losers must travel through the sewers of Promethea, racing against Tediore to open a dormant Vault. As they figure out a way past the Tediore guards, they must also battle for honor and glory in a Vaultlanders duel, with QTEs deciding the winner of glorious plastic combat!

And as usual in the Borderlands universe, all hell breaks loose when they find the Vault.

Have you had some of that Borderlands burnt out as of late or are you ready to dive further into the insanity and 'dumb' that it always offers up for entertainment? How will this one punch us in the gut or will it be another story as we have seen from the IP up to now? Were you concerned that some of the gameplay was going to be shifted or is this always what is going to make this part of the IP work? Tell us all down in the comments and then feel free to discuss it all if you so wish. More will be on the way for New Tales From The Borderlands, so please keep checking back in for all of that and everything else that the team is going to be able to share with us all.