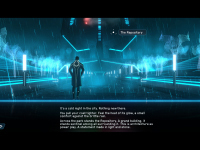 A new TRON title was announced during D23 this year with TRON: Identity on its way to suck us all back into the IP

Just when you think certain IPs out there are lost to our nostalgia and memories, we get the announcement for TRON: Identity out of D23 this year. As the name alludes to, it is a new title in the line that will have us back on the grid with Bithell Games helming this new out into the cyberspace. So it looks like it is time to get those Identity Discs back on and break into the Grid one more time as we uncover the extra secrets that TRON: Identity has to off up. Well, at least when it hits the PC and consoles in the future. This is just an announcement and basic reveal to have and nothing massive as we might have had our hopes built up to.

Not too much for TRON: Identity is known outside of the name and some of the basics we have already stated here, but it does look like it will be more of a visual novel out there more than anything. All as we set out to reveal more memories out there in the world where things will be hidden in various Identity Disc puzzles out there too. At the very least, it will give TRON fans a lot more to go on and show Disney that there is a want for something bigger for the IP. That is how it normally feels like it goes when it comes to titles like this with the visual novels building into larger-scale games out there. I guess we will only have to wait and see now that this one has been announced and is slated to hit sometime in 2023. Have a look at the teaser to see what you might have missed so far.

Something has been taken. Enter a new Grid and forge alliances via visual novel gameplay, uncovering truths through Identity Disc puzzles. Make critical decisions and plot your own course in a world without a creator.

In a new Grid, forgotten by its creator and left alone to evolve without User intervention, an unprecedented crime has been committed. The Repository stands at the center of this society. In the aftermath of a break-in, the future of this Grid hangs in the balance.

TRON: Identity is a visual novel adventure following Query, a detective program tasked with uncovering the mystery of what was taken and by whom. Finding yourself in a world built on unstable foundations and filled with whispered knowledge, it’s up to you to question suspects and investigate your surroundings to piece together the truth.

The decisions you make will actively influence the story, with a multitude of possible outcomes, good and bad – all depending on your carefully chosen words. You’ll interact with a number of intriguing characters, and decide whether to ally with them, spurn them, or even derezz them. However you choose to deal with them, you’ll need to recover their lost memories in your search for answers, puzzling your way through defragging Identity Discs. The world of TRON is growing, and your adventure is the seed.

Have you been pining for anything new in the TRON line and will a new detective title scratch that itch? Do you think there will be other gameplay beyond just a visual novel or will this be as much as we could hope for thus far? How far do you think this will build out the universe for this IP and could it lead to the team building something bigger down the line? Tell us all of your thoughts on this down in the comments and then feel free to discuss it all. When we have more to share for TRON: Identity, we will have it all here for you. Please keep checking in for all of those updates and everything else that is yet to come. I am sure you will be glad to get everything that you can.