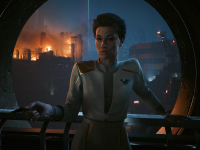 For those that have been sticking around with Cyberpunk 2077 here, we have some good news to take in here today. This is not just about the new Netflix show that is coming or the upcoming update that CD Projekt RED is pumping out to us. No, it looks like we are getting a whole new expansion into Cyberpunk 2077 with the reveal of Phantom Liberty coming to the PS5, Xbox Series X|S, and PC in 2023. There is still a bit of a wait, sure, but it is a good sign that we are not being left in the lurch for all of this after the insanely rocky start to it all. It might be time for everyone that put it aside to dive back in.

While it is nice to get this announcement for Cyberpunk 2077, what is not nice is the limitation on what we actually get to know about it all for now. It will be adding in a whole new district to the game and a whole new cast of characters to Night City. All with a new spy-thriller to play out there with V as they dig back into the New United States of America. We can only assume from there outside of the little bit of gameplay we have mixed in for Cyberpunk 2077 just below. All of this is most likely for the best so that players do not get their expectations higher than they should and the team can give us their vision of things. As it should have been in the first place, but gamers can be terrible to the artist that are bringing them the entertainment. For now, I will gladly sit back and wait.

I, V, do solemnly swear that I shall faithfully serve the New United States of America.

Get ready for Phantom Liberty — a spy-thriller expansion for Cyberpunk 2077 set in an all-new district of Night City. Coming in 2023 to PC, PlayStation 5, Xbox Series X|S, and Stadia.

Have you been holding out for the next expansion to hit Cyberpunk 2077 or did you give up on the game a while ago now? How large do you think this new area will be and will it be vastly different than many others in the past? Are you getting some stronger military feel to all of this or is that just how the trailer was cut for now? Take to the comments and feel free to let us all know while discussing it all. We are going to keep our eyes on Cyberpunk 2077 and all of the DLC that is still yet to come for it all. Just be sure to keep checking in here for all of those updates and much more. We know it will be one Hells of a ride to get there.