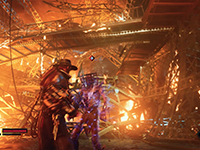 If you are some of the few still recovering from the delay of Evil West, it looks like you will have a little reprieve of things until November 22nd. Either that or a little more torment with the latest and long gameplay video that Flying Wild Hog has opted to give us all. A nice, new, and extended bit of gameplay for Evil West that walks us through around twelve minutes of footage that feels early in the game's story. I only mention that given what we do get to see and if there are any out there that are trying to keep away from any form of spoiler in the game. Even if this is more of a showing of how it will function when it finally hits the PS4, PS5, Xbox One, Xbox Series X|S, and PC.

In this new footage for Evil West, we get a little more of a glimpse as to how the organization has been funded and operated over the years to lead to where we are going to be joining in. We also have a little bit more on some of the extra gear that we will have to use beyond the basic guns and melee weapons to bring down all of these monsters that are making the West a terrible place to be. All of which feels more and more like a grimier version of Darksiders to me, but this is an amazing thing to see for Evil West given my feelings toward that title. Especially when we get to see how fluid the combat will be, how we will need to use the environment to help us out, and then a nice, big, old boss fight to wrap it all up. If you are not trying to hide from spoilers, have a good look and get ready to wait out the next long months until we get the game in our hands.

Evil West, the third-person action game that puts you in the boots of a vampire hunter rescuing a Wild West devoured by darkness, just revealed a new extended gameplay video, and opened pre-orders for all platforms. Coming November 22 to PlayStation 5, PlayStation 4, Xbox Series X|S, Xbox One, and PC, the game fires you up in 12 exhilarating minutes of gameplay and cutscenes, fully showcasing an early level in Evil West’s narrative-driven campaign and an additional boss fight.

Evil West releases on November 22 on PlayStation 5, PlayStation 4, Xbox Series X|S, Xbox One, and PC. Pre-orders are open on all platforms and on the Focus Entertainment Store with an exclusive cover art for physical editions. All players pre-ordering the game digitally will receive the Wild Wild East Skin Pack, which is included in all physical versions of the game.

Do you get the same vibes from Evil West as I do after all of this new gameplay or do you think it is going to handle like another massive game out there? How many more gadgets will we have to pick up during the game or will the rest be some deviation of weapon to use? Do some of these things look more like demons than vampires or is the team using vampire as a broad term to cover all forms of bloodsucking monsters? Go ahead and let us all know down in the comments what is on your mind for this and then feel free to discuss it all. More for Evil West is certainly on the way to us all, so be sure to keep a close eye on the site for all of that. You will not want to miss out on a single thing.