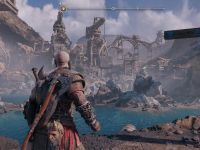 Another realm for God Of War: Ragnarök is finally here with the lands of the Dwarves putting the God Of War to new challenges

We have been told that we will be able to go to all of the realms in God Of War: Ragnarök after having a few limited or just blocked out in the last title. It totally worked for the story but it felt odd that Santa Monica Studio still left the options in the game with telling us a big "no" when trying to access them. Thankfully, when God Of War: Ragnarök launches on November 9th for the PS4 and PS5, we will get access to those new worlds out there and we have a small sample of one of those realms right now. It is on the slight side, but here we go with a look at Svartalfheim in the game for us all for the first time.

In the following short bit of gameplay for God Of War: Ragnarök, we have a look at Svartalfheim in the upcoming title. This is the realm that the dwarves are from and will be full of all manner of inventions and mechanical devices out there. Devices that Kratos and Atreus will have to use to their advantage and solve how to work with their various weapons too. It is interesting to see here but it is more of the duo wandering about and very little of the rest of the gameplay action in the mix. It does kind of highlight the various ways we will navigate the realms of God Of War: Ragnarök too. Here it looks like we will need to use the canoe just a bit more as we have in the past. It is the first bit of real gameplay in a while, so you can at least take that in at the very least.

In this exclusive God Of War: Ragnarök gameplay video, we showcase how Santa Monica Studio’s level designers made the new dwarven realm, Svartalfheim, larger than life.

Lead level designer James Riding and level designer Jon Hickenbottom spoke with me about their experience crafting the points of interest, with the former saying, “We wanted to evolve the gameplay in the level spaces – more variety and verticality. In Svartalfheim, you’ve got a lot of places that you go to all within one realm. It’s so much content.”

How excited are you to see another realm finally show up for God Of War after making the leap over to the Norse side of things? How many puzzles will be in the mix of this new realm and how many times will we have to freeze and smash to solve it all? How do you think the other realms will build into all of this gameplay or be altered to give us all a new experience beyond some of the basics we had before? Give us all of your thoughts down in the comments and then feel free to discuss it all as you so wish. When we get anything more for God Of War: Ragnarök, you know we will share it all here. Please keep checking in for all of these updates and everything else.