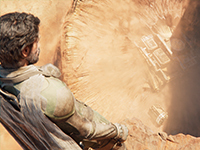 A new MMO in the Dune universe is on the way with the recent announcement we have for Dune: Awakening coming in the near future

Just in case we did not already have enough of the Dune IP out there as of late, with the RTS and films added in, we have another title on the way to us all in the future on the PS5, Xbox Series X|S, and PC. One that seems to have fallen through the cracks of announcements out of Gamescom this year, but we caught it here for you to help share what Funcom is trying to bring to those fans out there. Here we go with the announcement for Dune: Awakening to help place us all further onto the planet of Arrakis once it is finally ready for us all. It is hard to say when that will be, but we currently know it is at least coming.

Sadly, that is most of what we know thus far for Dune: Awakening, as all we have is a nice cinematic trailer to look at for the announcement and the listed MMO style of gameplay. The video does show off some of the bigger spectacles out there in the game's world, but seeing as it is all cinematic and it unlikely we can destroy sections with the worms, I have a feeling it will be a bit tamer than this. It is a Survival MMO, so maybe we will be able to cause all of the destruction out there, but that could quickly turn players off from Dune: Awakening if they are not able to stay logged in constantly to make sure it never happens.

Dune: Awakening combines the grittiness and creativity of survival games with the social interactivity of large-scale, persistent multiplayer games to create a unique and ambitious Open World Survival MMO. Rise from survival to dominance in a vast and seamless Arrakis shared by thousands of players.

Head into unmapped sectors and be the first to discover secrets and riches before the coriolis storms once again shift the sands and alter the landscape. Narrowly escape colossal sandworms, build your home from shelter to mighty base, and traverse the dunes in iconic vehicles from the universe.

Hunt for spice blooms and deploy your harvester, then protect it from rival factions in fast-paced, deadly combat that shifts seamlessly from armored groundcars to ornithopters in the sky. Plot your rise to power and build your influence within the Landsraad through careful intrigue.

Have you been pining for something new in the Dune line out there and will this be something you want to dive into? Do you think the trailer will be anywhere near what the gameplay could be or would that be too much for players to have to deal with all the time? Will we be able to leave the planet during the game or will it all be isolated here with more of the spice than we could ever want? Tell us all of your thoughts on this down in the comments and then feel free to discuss it all as you so wish. When we have more for Dune: Awakening, know it will be up on the site for you. Please keep checking back in for all of that and much, much more.