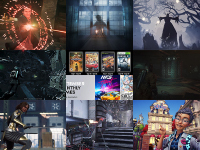 Put a fork in it, this week is finally done and we have been able to get so much more of that gaming news out there to you. Given that we have had a few conventions specifically around video games here, it makes sense that we have been flooded with a lot more than normal. With plenty to dive into with The Callisto Protocol, Midnight Suns, and Disney Dreamlight Valley to name a few. Most of which was only scraping some of the surface for all of these video games as Gamescom quieted down for the others to pick back up. A perfect time for it all to given the normal cycle we have for the industry and some of the events going on behind the scenes over here.

As we look forward to the coming week, we are going to be playing a little bit of catch-up to the rest of the news for the various video games we have not had a chance to cover and a few more upcoming reviews to share. There is also a lot going on for the team that we will most likely see a bit of a slump beyond sharing some basic videos in the coming weeks. It is not that we are giving up on you, but more that real life is making the video games need to take a bit of a backseat for a week or so. Hopefully, we will be able to get you through that lull a bit easier with some of the basics. All we ask is that you check back in as we get things ramped back up in the following times.