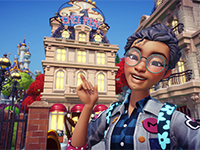 The world of Disney Dreamlight Valley is getting closer to the Early Access release out there and there are many out there that might still be wondering what is going to be happening in the game. Is it a life-sim? Is it an action game? Just what is it that Gameloft is building for us all to experience on September 6th? Well, we have a new slice of life to look at for Disney Dreamlight Valley as we get walked through a normal day out in the lands and a few things that we are going to be able to do in the game. Even if it all looks like it is going to boil down to a chore simulation with all forms of fun added in around it.

In the latest world preview we have for Disney Dreamlight Valley, there is a nice little daily grind we get to see out there. Obviously, we are going to need to create our own avatar to use in the game. This can be done as of right now too, if you are so inclined, so we can be fully ready for the release. It will give us all our own little version of ourselves to adorn with all of the fun little Disney bells and whistles so we can go out and then build our own house too. Another bit of the game is to make sure we can be fully customized out there and ready for having any of our virtual friends over to experience things. All of these look to be the main reward we will get while heading out to help the various denizens of the game.

Here is where the next part for Disney Dreamlight Valley looks to be more of the meat and potatoes of it all. We are going to run into various tasks out in the game's world that will require us to do some mini-games or fetch quests to help out some of the other characters along the way. This could be gathering resources to help with new recipes or putting out business signs to drive up business. More or less, it sounds like all of the Disney characters will have some kind of chore for us to do so we can help the whole game world flourish. Maybe this will also lead to some deeper gameplay and minigames as we progress further out there and unlock new lands to set up a lounge in.

Disney Dreamlight Valley — My Day In The World

Join us on an adventure and see what your first day in Disney Dreamlight Valley could look like! Live magically with your Disney and Pixar friends on September 6 when the game launches in Early Access.

Disney Dreamlight Valley Avatar Designer Tool – a standalone look at the game’s avatar creation system – is now available for free on Steam, The Epic Games Store, and The Microsoft Store. With the tool, players can design their own unique avatar, check out some stylish Disney and Pixar-inspired clothing and accessories, and port the final design alongside an exclusive jersey cosmetic item to the full game on PC or console.

If all of this sounds like something you want to dive into, you can pre-order your version of Disney Dreamlight Valley as of right now and in various forms. There are three different Founder's Pack Editions to pick up and each offers up various cosmetics to use along the way. You can see a little bit of them in action just a bit lower, but each looks to add in some character options, home options, and companion options that we will either have to naturally unlock or be locked away from as we go further into Disney Dreamlight Valley. Since the Early Access is almost here, though, it feels like the right time to have a gander and see if you are ready to toss some extra cash at the whole experience now.

Take a look at our Founder’s Pack Editions which includes exclusive cosmetic items, animal companions, motifs, and more! Choose your Edition today to be one of the first to experience the game when Disney Dreamlight Valley launches in Early Access on September 6.

Are you ready to build your own little land in the Disney setting out there? Will there be more than just basic chores and fetch quests for us all to complete? How many different cosmetic packs will we be given the option to pick up during this Early Access? We all want to know your thoughts on this, so feel free to comment down below. If I am able to get more to share for Disney Dreamlight Valley, do know that I will have it all here for you. Please keep a close eye on the site for all of that and everything that the rest of the team has to offer up to us all.