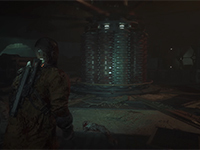 The gameplay keeps on rolling out there for The Callisto Protocol and this is a nice new bit we have out of Gamescom that shows off two different bits for us to enjoy. Even if it is all on the darker side of the visuals. Both in the way of the lighting and in the way of the level of gore that Striking Distance Studios and Krafton have built for us. All of which is running on the PS5, Xbox Series X|S, or PC to truly give us a sample for what The Callisto Protocol is going to throw our way on December 2nd this year. Warning, it is a bit on the gory side of things. All to be expected for a game that is leaning into the dismemberment systems from some of the team's past.

Even though the following footage is all one little section of The Callisto Protocol, it is worth noting that we are getting some specifics highlighted here. Unless you want to think this is how the game is going to truly play in the end. Given that it focuses on stealth and a gravity gun of sorts to move enemies around, I am going to guess that. More so, when we have a huge meat grinder that we can toss them all into and never have to pull the aggro on the enemies here. But then we would not get to see how the gun and melee combat mix into The Callisto Protocol. That or how far down we can grind some enemies before they drop. Then there is that whole fully healing part that feels like it will always be a looming reason to double-tap everything out there in the environment.

After that, we move over to a bit more of an action sequence in The Callisto Protocol. It is, more or less, a massive waterslide section where we are going to have to dodge various things along the way to make sure we can get to whatever ending there is supposed to be. This is where it feels a bit more "par the course" for The Callisto Protocol than anything. Sure, it will be a bit intense and it looks like we will be able to have a gruesome death at any point, but it is a massive dodging section in the end. Have a look at it all just below and see the new footage in motion. We only have a few more months until this will be ours to control, but it still looks like it is going to be a solid title with a few of the basic tropes thrown in to help keep some of the pacing.

New Gameplay Reveal Captured on Next Gen Hardware for The Callisto Protocol — added tension and brutality from the mind of Glen Schofield. Coming December 2nd, 2022.

How far do you think we are going to have to go with the limb-slicing in The Callisto Protocol or will there only be so much that can be done out there? Do you think all enemies will be able to regen along the way or was this a special one just for the showcase? Do you think the slide portion could have been a little more exciting or will this be used to just force our hero into a new location with little else to motivate us all? Tell us all what you are thinking down in the comments and then feel free to discuss it all as you so wish to. We will keep sharing everything that we can for The Callisto Protocol, so please keep checking back in for all of that and everything else we will have to offer up.