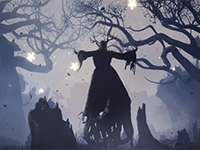 The story of the Yaga is carrying forth with Blacktail and now we have a little more to go on for the story and maybe one of the other gameplay elements that The Parasight has only gone into a little bit so far. Given that the game is still slated to come to the PS5, Xbox Series X|S, and PC this Winter, we are going to need everything out there that we can. This is what we now have out of Gamescom for Blacktail so we can get a feel for how we will be a good witch or a bad witch by the end of the game. All while being another top-notch archer to take down the enemies in the world when not using all of our magicks out there too. We are going to be a witch no matter how we slice it here.

In Blacktail we will be playing as Yaga a 16-year-old that has been accused of witchcraft. We are going to start running for our lives in the game and make hard choices to see if we become the darkest version of the character or try to hold out hope and be the best version. That will most likely be the hard aspect to go with in Blacktail, as it usually is, and we get a few glimpses in the new footage on how that will function. It even looks like we might have to sign the proverbial deal with the evil entities out there too. Maybe this will make it so we can get more power quickly and make the game easier while making us go down that dark path too. I hope we do not have to wait too long to see any of that in full form.

Focus Entertainment and The Parasight are thrilled to announce the upcoming release of Blacktail, a surreal first-person action-adventure game, where the story of Baba Yaga comes to life. Explore an original take on Slavic folklore and forge your own legend. Become either the guardian of the woods, or the terror nightmares are made of. Coming this winter on PC, PlayStation 5, and Xbox Series X|S, Blacktail is already available to pre-order on Steam.

Become the guardian of the woods or the terror nightmares are made of.

You play as Yaga, a 16-year-old girl accused of witchcraft and expelled from an early medieval Slavic settlement. When living memories of her past return as foul, walking spirits, Yaga is faced with no other option than to hunt them down in hopes of unraveling her own mystery.

Bringing a one-of-a-kind blend of intense archery combat, magic, and dark storytelling set in a vibrant fairy tale world, the game takes you on the defining journey of an ambiguous folk figure. Will you be a good witch and protect the forest? Or will you be the evil that haunts children’s nightmares? Only you can decide.

Blacktail will release this winter on PC, PlayStation 5, and Xbox Series X|S. The game is now available to pre-order on Steam.

How do you think Blacktail will truly flow in the story and will we be able to get a true morality system in the mix here? Will we also take hits to that morality if we kill creatures out there and we will need to keep shooting down their weapons instead? Will we always get easy choices to go down the evil side or will there be some easy choices to keep us good or maybe neutral? Feel free to let the world out there know what you are thinking down in the comments. If we have more for Blacktail, we will certainly share it all on the site for you. Just please keep checking back for all of that and everything else we can get our hands on out there.