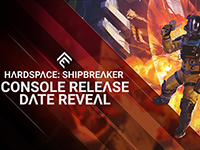 Check out the new trailer for Hardspace: Shipbreaker that has dropped out there for our viewing pleasure

Hardspace: Shipbreaker is a sandbox, spaceship-salvaging title for the PS5, Xbox Series X|S, and PC coming from Blackbird Interactive and Focus Entertainment and hitting the P5 and Xbox Series X|S on September 20th, 2022.

Experience the daily life of a working-class spaceship salvager in Hardspace: Shipbreaker, where each shift brings the opportunities for big profits but even bigger risks, depending on your reflexes and skill. Experience the excitement of living, dying, and repeating the cycle while contending with next-gen physics and demolition effects set in a realistic industrial sci-fi future in the game’s story mode, or sit back, relax, and get lost practicing your salvaging skills in Free Play.