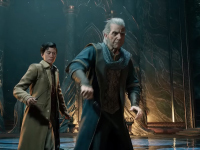 It is that time of year where all of the Potterheads get together and celebrate everything about the IP, which means we have even more for Hogwarts Legacy to go into. We are still hoping for a closer release date than February 10th, but that seems to be locked in solid by Avalanche Software. Thankfully, what we are getting as of right now is a way to bring our own little bits into the world of Hogwarts Legacy. Not in a way of 3D scanning or anything, but through linking our Wizarding World accounts over to the game so we can get the unique elements from all of those quizzes to show up in our personal game. A nice little bit to have for those massive fans that want to make sure their student is closer to them as possible out of the gate.

While that is a cool little extra we can all take part in, we also have a longer look at various locations in Hogwarts Legacy that we are going to get to explore. A few are pulled out of the locations built around at the various theme parks out there, and from the books, but the bigger aspects are the common rooms for each of the houses. This is something that has yet to be made vastly shown off in the various other mediums to date. Now we will actually get to enjoy them all and get closer to the book descriptions of Hogwarts than the films ever have done. Even if it is going to be going a bit further back in time with it all. Just getting ready to have some new areas to stroll around in when the game launches is the bigger takeaway from all of this.

Hogwarts Legacy — Back To Hogwarts

Prepare to uncover new secrets, master your magical abilities, and experience the hidden thrills of the wizarding world in this breathtaking open-world action RPG from Avalanche Software. In celebration of Back to Hogwarts 2022, we explore the Hogwarts common rooms, and never-before-seen ruins beyond the castle grounds, featuring a special appearance from a familiar ride at Universal Orlando Resort, and reveal how fans can access exclusive in-game rewards.

Have you already selected your Hogwarts house to join or will you let the game do that when it finally launches out there? Does the addition of some of the other locations from the literature excite you more or would you rather have the same basic stuff we have had many times over? How many different styles of wands will we actually have in the game based on this new promotion or will it always be a set thing and only have something close enough that most will not recognize? Feel free to let us all know down in the comments what you are thinking about all of this and everything else we have to share. I am sure we will have more for Hogwarts Legacy, so please keep checking back in for all of that and everything else we can offer.