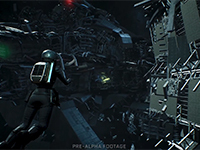 Fans of The Expanse can see a bit more on how The Expanse: A Telltale Series is going to further expand it all

The hype train is getting up to steam for The Expanse: A Telltale Series and out of Gamescom we have some new gameplay to take in and see how they are going to further the story in general. Given how much work Telltale Games has to do to get back to their heights again, this could be a bit of an undertaking. Even with Deck Nine Games and the cast from The Expanse doing everything that they can out there. I am sure they will do it when it finally hits the PS4, PS5, Xbox One, Xbox Series X|S, Switch, and PC. But this is not why we are here today. We are here to see how things have progressed so far for the game.

Here we get to see as the teams are expanding on things in the universe of The Expanse as our scavengers head out there to do what they are out there to do. They are also going to get to do a whole lot more too, with this game giving us a zero-gravity bit of gameplay as we go and explore around the stations and ships. This makes me think that there will be more hidden elements in the game here too. All while we have to deal with the other darkness that The Expanse will mix right in there too. It is stated here that we will be seeing the last moments of the various people we are scavenging from. Some of these moments are going to be extremely dark. As you will be able to see in the latest behind-the-scenes video we have to share right now.

Go behind the scenes with the dev team and actress Cara Gee!

This quick look shows some of the new gameplay we’re using to tell the story of Camina Drummer in The Expanse: A Telltale Series.

You will enter The Expanse Summer 2023, beratna!

Does all of this fit the universe of The Expanse or will you need to watch the show once more to see what is going on here? How well do you think the zero-gravity will function given how the games have been built in the past? Will this be the best outing that the teams need here or will it just be a sample of what is to come out there? Tell us all of your thoughts on this down in the comments and then feel free to discuss it all. We will keep sharing all that we can for The Expanse: A Telltale Series and we know there will be a whole lot more to come. Please keep checking back in for all of that and everything else that we will get to see.