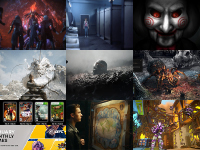 There we go and wrap up one more week and get a little closer to all of those releases and video games coming soon. We have some big ones coming next week, like Dying Light 2, and then soon after with Horizon Forbidden West and Sifu. So many games on the way to help keep us going with the delay of Evil Dead: The Game and some of the other video games we are still waiting for. These just happen to be the shorter list of titles that we have from the week and so many more we are still waiting for some true updates for. All of which should be fully worth the wait.

That all said, again, we have some of those video games on the list to bring you as soon as we can for review. All of which are based on embargos and that we have listed here already. Something for you to keep an eye on for it here on the site. There are a few other video games we have in the works for larger pieces too but will need to be held in reserve for now. I know that makes it a little difficult to keep things exciting, but we do need to abide by the rules that have been placed down on it all. This also goes toward the gameplay we are trying to capture for it all too. With any luck, it will be what you have been hoping for with all of the convention cancelations going on.