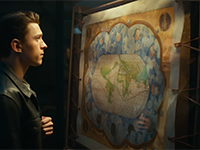 February 18th is going to be a busy day for all of those PlayStation fans out there. We have the launch of a huge title on that day and Uncharted will be hitting theaters for them to see how it compares to playing the game. Obviously, there will be some differences between them all and Naughty Dog will still have the video game side on lock, but that does not diminish any of the hype we should have for now. Hype that is only perpetuated by the latest and final trailer we have for the Uncharted film. A trailer you can take in right here if you are not worried about any spoilers. As if the game would not have done a good portion of that already.

Weirdly enough, this latest trailer for Uncharted does not feel like it is offering up much else that it has not already given us before. The same action pieces that we have seen just with a little more dialog mixed in to further the story and motivations a bit more. I mean, five billion dollars would get most to set out to do what we see here. Even if it will be over-the-top and not be anything close to what an average person should be able to do. Not that Uncharted was all that grounded, but it was quite a bit more than this is making it seem. We will find out soon, though, when it hits theaters and we can be the final judges of it all. Here is hoping so we can get some of those other stories brought into live-action too.

In a race for $5 billion, be careful who you trust. Tom Holland and Mark Wahlberg star in Uncharted, exclusively in movie theaters February 18. Tickets on sale Sunday, 1/30.

Street-smart Nathan Drake (Tom Holland) is recruited by seasoned treasure hunter Victor “Sully” Sullivan (Mark Wahlberg) to recover a fortune amassed by Ferdinand Magellan and lost 500 years ago by the House of Moncada. What starts as a heist job for the duo becomes a globe-trotting, white-knuckle race to reach the prize before the ruthless Santiago Moncada (Antonio Banderas), who believes he and his family are the rightful heirs. If Nate and Sully can decipher the clues and solve one of the world’s oldest mysteries, they stand to find $5 billion in treasure and perhaps even Nate’s long-lost brother…but only if they can learn to work together.

Will you be heading out to see Uncharted on day one or will you be playing a new video game instead? How long before we see it hit home and theaters at the same time or will this be moving back to the dark times of theaters only? Do you like how these action sequences are looking or will these be the biggest highlights of the whole film and this is why they are obfuscating the rest out there? Let us all know down in the comments and then feel free to discuss it all. If there is anything more for Uncharted in general, know that we will share it all here. Please just keep checking back in for all of that and much, much more.