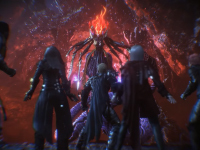 The final trailer for Stranger Of Paradise: Final Fantasy Origin is here to show how this game will link into the grander Final Fantasy

The final trailer we are going to get for Stranger Of Paradise: Final Fantasy Origin has dropped out there for us now. A little odd since it is still not hitting the PS4, PS5, Xbox One, Xbox Series X|S, and PC on March 18th, but it is what it is for now. Most likely we will start to get more of the gameplay breakdown from Team NINJA as we lead into the launch. This is something that I am hoping for given that this new video shows off how this one will mix into the bigger Final Fantasy lore of it all. Especially since this one seems to place us on a weird trajectory into it all now.

I say all of that, as it looks like our heroes are being transported into the Final Fantasy world from another one. Unless I missed the fantasy characters having cell phones in the past. I do not remember that at all but it does help us see how this one will work into the bigger story of it all. It will be a little interesting to see how these other characters get all of the cool abilities and skills that they will need in the jobs here. I might be reading into things a bit more and this could just be something that is not truly going to be the case for Stranger Of Paradise: Final Fantasy Origin. If only this was not truly the final trailer for it all.

The four fiends of chaos are waiting. As you battle the darkness consuming the world, recover your past and discover your true purpose.

With a multitude of job classes, abilities, and combos you can face the hordes of darkness your way!

How do you think this will feed into the core of the Final Fantasy story here? Do you think our heroes will be transported from a future into the past or will it be something else that is going on to shake things up? Do you remember there being dark and light elves in the mix of it all before or was that hard to tell with how they were designed before? Feel free to let us all know down in the comments and then feel free to discuss it all. More for Stranger Of Paradise: Final Fantasy Origin will hopefully be on the way. If there is, we will share it all here for you. Even if things do not seem likely at this point.