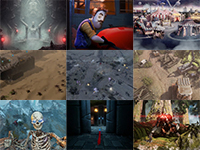 This was much more of an exciting week for all of our video games than it has been in the past. Usually, the weeks before and after Christmas here are insanely slow, which was not the case this time around. At least as of yet. We had some fun for Tiny Tina’s Wonderlands again and a new update for Horizon Forbidden West in the mix. Not to mention other video games getting the announcement as Sonic Frontiers and The Expanse had in the mix. All a whole lot of fun and things to get us excited for the coming years when it comes to the industry. Now we just have to hope that the ball keeps on rolling as it has been to close out the year we have had here.

With all of the hype we had for these various video games here this week, I have a feeling that next week will be the normal slowdown we have out there. Especially since most of this week was still playing a bit of catch-up to what we had over the week before but did not have a chance to get to. That does mean that we will have some extra time to actually play some of those video games we have missed up to now and maybe picked up for the holiday season. We will have all that we can offer, but do know it will be a bit scarce out there and scrapping some of the bottoms until we can start sharing all that we can out of CES at the start of the year here.