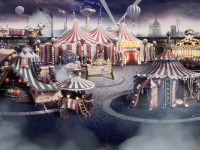 Here we go with another fun RPG in the mix with some turn-based battles with Circus Electrique. This is the latest title that is coming out of Zen Studios that is generally not know for these kinds of games. Those familiar know them mostly for the virtual pinball titles we have out there. That is why it is interesting to have a look at Circus Electrique after its announcement and see what we could be experiencing on our PS4, PS5, Xbox One, Xbox Series X|S, Switch, and PC in 2022. Something that is part turn-based, tactical, and management title all rolled up in a fun Victorian Steampunk setting. So many things going on that we will have to manage here.

That is a whole lot to take in in one shot here, but that is the fast version of the Circus Electrique pitch. In the game, something has happened to the population out there and only the members of this circus have the abilities and skills to stop it all. We will have fourteen different types of characters to play Circus Electrique as we head out there into the turn-based battles. In addition to all of that, though, the crew still needs to eat and live. So there will also be a “manage the whole circus” in the mix to increase everyone's abilities and chance to survive it all. Also to make sure it is entertaining and everyone still gets along with each other too. It is hard to see any of that in motion, but we do have a fun trailer to help us get ready for more to come down the pipes.

When everyday Londoners mysteriously turn into vicious killers, only the circus’ lineup of Strongmen, Fire Blowers, Clowns, and other performers possess the unique talents necessary to save the city.

Do you think that Circus Electrique will boil down to just a turn-based RPG or will everything blend well enough to give us multiple gameplay systems? Do you think each of the archetypes will have fully developed characters or will some just be copies with different stats and skills? What do you think is going on with the population that the crew must fight but also entertain out there? Give us all of that feedback and more down in the comments and then feel free to discuss. More for Circus Electrique is on the way and we will share it as soon as we have it. Just be sure to keep checking back for all of that and everything else we have in the mix.