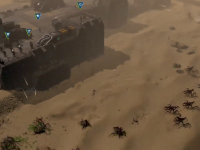 Work is still flowing out there for Starship Troopers: Terran Command, even if it feels like it has been a good clip since we had something solid for the game. That is always a mixed bag, as it does indicate that The Artistocrats and Slitherine are hard at work on the game over cutting fun little promos to remind us the game is still coming. It just also means that unless you are paying close attention to all things Starship Troopers, you might forget it is heading to the PC soon. It also makes updates like the one we have for the music and soundtrack for the game a bit more exciting than just another reminder.

The fun news here is that fans of the Starship Troopers films will be getting a bit more of a treat when it comes to the audio mixing in the game. More so since the team has built a new system to mix the audio a bit more dynamic to give us an authentic feel to a feature film instead of just mixing two pre-recorded tracks together to simulate it all. Here it sounds like each of the various instruments will be added in and tweaked dynamically based on the location and action going on in the game. It will also be used to help highlight some of those bigger events in Starship Troopers: Terran Command to get us further engaged and wanting to know more. Have a look at the latest behind-the-scenes video to get a better understanding of the new technology that is coming here.

Starship Troopers: Terran Command is a thrilling real-time strategy game set in the Starship Troopers movies universe. Take command of the Mobile Infantry and do your part in the war against the Arachnid threat. Ensure that human civilization, not insect, dominates the galaxy now and always!

Have you been able to keep up on all of your Starship Troopers news out there or did you forget the game was going to be coming too? Does it sound like that game is going to give you a closer feel to the films here or will that still need to be seen in the mix? How else do you think the music will highlight the action in the mix or will it boil down to these kinds of moments only? Let everyone out there know what you are thinking and then feel free to discuss it all. If we have more for Starship Troopers: Terran Command, it will be up on the site as soon as we can get it. Just be sure to keep checking back for all of that and much, much more.