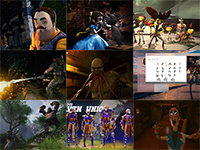 That wraps up more of the news and updates for this week and all of the other video games we had out of this year's E3. We barely had a chance to get to all of them, but we did get to make a dent into the over 180 titles that did get the highlight during the event. Video games such as Hellblade 2, Psychonauts 2, and S.T.A.L.K.E.R. 2 in that growing list of titles out there. There are still many more to look and take in, but we will have most of those dropped off on our YouTube channel given that they are more of the cinematics instead of anything of much substance. That or a lot of what we have seen before but they needed to have some form of highlight in the mix of things. Again, it was a fairly filled event even if it was still all digital once more.

Now we are looking forward to the next week and the video games that we still have to look and take in along the way too. That also means that we will get a slight break to sit back and try to play some of them and get those reviews we have held onto out there for you all as well. We did not want to have any of those video games get lost in the mix of things, so we held off until E3 was mostly over. Just be ready to have all of that drop out there and maybe a few streams to come so you can see some of the processes play out live. Well, live-ish given how it still all mostly goes for it all. Until then, have a solid look at everything we have on the channels and site, just in case you missed out on something.