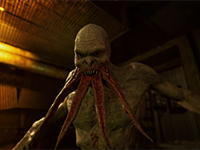 It came and went, but we managed to snag a look at the latest for S.T.A.L.K.E.R. 2 fresh out of this year's E3 and it shows us quite a bit more than some might have been expecting for the game. Even if it is all presented in a way that feels like it is not part of the game at times. That could be what GSC Game World is aiming for here and, I kind of dig it. Even if we are only looking at S.T.A.L.K.E.R. 2 to hit the Xbox Series X and PC when it does finally launch out there April 28th of 2022. That is quite a bit of a wait, but at least there is finally an end in sight after all of the teasing and hinting at things along the way. That has to be the better part of all of this here and I know I will gladly take it all.

Now that we have all of that out of the way, we can dive into the meat of the gameplay we have here for S.T.A.L.K.E.R. 2. It is all something that feels like it will fit in the world that has been built already, but more or less a horror FPS title with some interesting guns mixed in. I am curious to see if the story will always play out as the group sitting around a fire to recall the events, but I have a feeling that is only for the marketing effect here. Even if it would help make sense when we die in S.T.A.L.K.E.R. 2, as we know it will happen. That and get lost in the amazing new world that is here with all of the horrible things that come along with that. You can take a look at it all for yourself just below and see how this FPS will at least look, even without the context to how the other mechanics will be different.

From epic cutscenes and underground labs to open-world fields, here is the first look at the gameplay of S.T.A.L.K.E.R. 2: Heart Of Chernobyl.

The game is next-gen only (PC, Xbox Series X|S) and will be available on day one on Xbox Game Pass (both console and PC).

Do you think this looks like the next best entry to the S.T.A.L.K.E.R. line or were you hoping to see something a little less predictable here? Do you think we will have the story unfold in the same manner we have in this trailer or will this only be to help sell the game and then proceed in the normal FPS manner? Are you surprised to see a release date set this far out and should we expect to see some delays along the way for it all? Give us all of the feedback down in the comments and then feel free to discuss it all if you so wish to. We will keep the news flowing for S.T.A.L.K.E.R. 2 as it gets out there and you will want to stick close to the site to stay up on all of it.